Guardians of the Galaxy Quotes

Guardians of the Galaxy

Guardians of the Galaxy Quotes 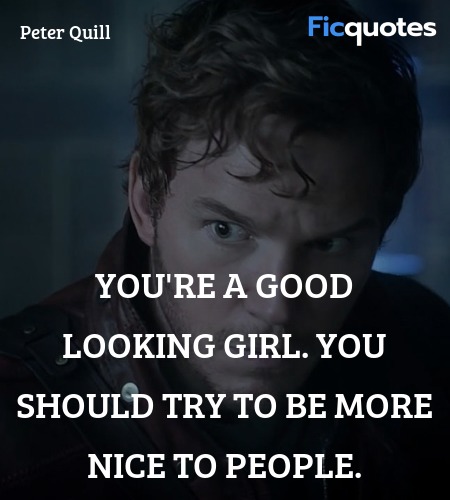 You're a good looking girl. You should try to be more nice to people. 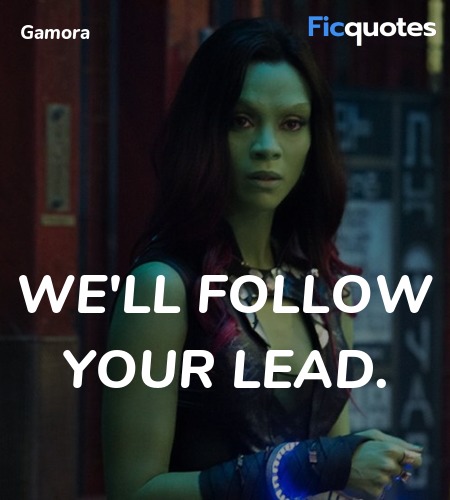 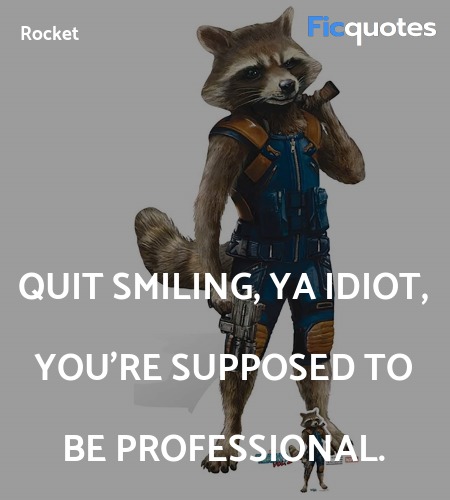 Quit smiling, ya idiot, you're supposed to be professional. 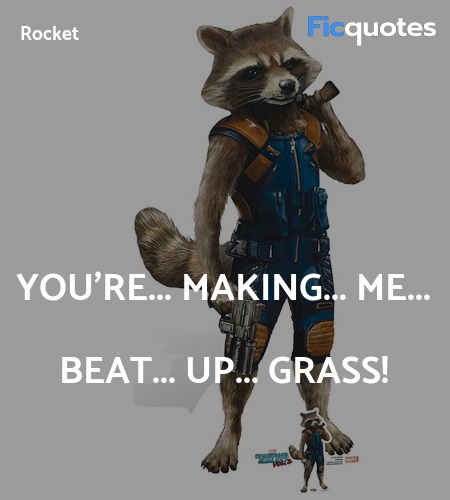 Drax : You are horrifying to look at. Yes. Bu-But that's a good thing.

Spare me your foul gaze woman!

Let us put more of this liquid into our bodies.

This was my opportunity to get away from Thanos.

Nova Prime Rael : The fate of 12 billion people is in your hands.
Peter Quill : Hold on a second, you're being serious right now?

Mantis : Drax! We need to talk!
Drax : I'm sorry... but I like a woman with some meat on her bones.
Mantis : What?
Drax : I tried to let you down easily by telling you you were disgusting.
Mantis : What are you doing?
Drax : Ugh... I'm imagining... being with you physically

Drax : You Remind me of my daughter
Mantis : Oh. is she disgusting?
Drax : She is Innocent

Mantis : Drax! That's not what I... I don't like you like that! I don't even mate with the... type of thing you are!
Drax : Hey! There's no need to get personal.
Mantis : Listen! Ego has gotten exactly what he wanted. I should have told you earlier. I am stupid! You are in danger!

We're the fricking Guardians of the Galaxy!

There are two types of beings in the universe, those who dance, and those who do not.

Mantis, look out!Drax : How did you get to this weird dumb planet?

Mantis : Ego found me in my larva state. Orphaned on my home world. He raised me by hand, and kept me as his own.

Drax : People usually want cute pets. Why would Ego want such a hideous one?

Mantis : I am hideous?

You just need to find a woman who is pathetic... like you.

Drax : Those pools, they remind me of a time when I took my daughter to the forgotten lakes of my home world. She was like you.
Mantis : Disgusting?
Drax : Innocent.

Drax : When you're ugly, and someone loves you, you know they love you for who you are... Beautiful people never know who to trust.

Yes! I have single-handedly vanquished the beast!

Mantis : Well, then I'm certainly grateful to be ugly.This gross bug lady is my new friend.

Nebula : All any of you do is yell at each other. You're not friends.
Drax : You're right... We're family.

Drax : How did you get to this weird dumb planet?
Mantis : Ego found me in my larva state. Orphaned on my home world. He raised me by hand, and kept me as his own.
Drax : So you're a pet.
Mantis : I suppose.
Drax : People usually want cute pets. Why would Ego want such a hideous one?
Mantis : I am hideous?
Drax : You are horrifying to look at. Yes. Bu-But that's a good thing.
Mantis : Oh?
Drax : When you're ugly, and someone loves you, you know they love you for who you are... Beautiful people never know who to trust.
Mantis : Well, then I'm certainly grateful to be ugly.

Out of the way, dumber smaller Groot!

Gamora : It's time we stand up for what is right.
Nebula : Ha.

I was only a kid when I left Earth, and I had no idea what the universe had in store for me.

I come from Earth, a planet of outlaws. My name is Peter Quill. There's one other name you may know me by. Star-Lord.

Yondu Udonta : We're Ravagers, we got a code.
Peter Quill : Yeah, and that code is: steal from everybody.

Peter Quill : Thank you.
Rhomann Dey : I have a wife and child on Xandar. Thanks to you, they're still alive.

The Collector : These carriers can use the stone to mow down entire civilisations like wheat in a field.
Peter Quill : There's a little pee coming out of me right now.

Yondu Udonta : When I picked you up as a kid, these boys wanted to eat you. They ain't never tasted Terran before. I saved your life!
Peter Quill : Oh, will you shut up about that? God! Twenty years, you've been throwing that in my face, like it's some great thing, not eating me! Normal people don't even think about eating someone else! Much less that person having to be grateful for it! You abducted me, man. You stole me from my home and from my family.

Korath the Pursuer : You don't look like a junker. You're wearing Ravager garb.
Peter Quill : This is just an outfit, man.
Peter Quill : Ninja Turtle, you better stop poking me.

Whatever nightmares the future holds are but dreams compared to what's behind me.

Can you believe they call us criminals when he's assaulting us with that haircut?

I know who you are, Peter Quill, and I am not some starry-eyed waif here to succumb to your... your pelvic sorcery!

Cease your yammering and relieve us from this arson confinement.

Nebula : Gamora, you've always been weak! You stupid, traitorous...
Drax the Destroyer : No one talks to my friends like that.

Drax the Destroyer : I like your knife, I'm keeping it.
Moloka Dar : That was my favorite knife.

Groot : I am Groot!
Rocket Raccoon : I know they're the only friends we've ever had!

Groot : I am Groot.
Rocket Raccoon : Asleep for the danger, awake for the money, as per frickin' usual.

Rocket Raccoon : No, Groot! You can't! You'll die! Why are you doing this? Why?
Groot : We are Groot.

They crumpled my pants up into a ball. That's rude! They folded yours.

Let's get something clear! This one here is our booty. You wanna get to him, you go through us... or, more accurately, we go through you!

Guardians of the Galaxy Quotes Videos

Guardians of the Galaxy - Peter and Gamora dance