Dwell into the Fast & The Furious world of street racing. Enjoy the fast-paced, tire burning, racing and heist film. Also enjoy the witty dialogue from the seventh edition of F&F series.

Dominic Toretto. You don't know me, but you're about to. 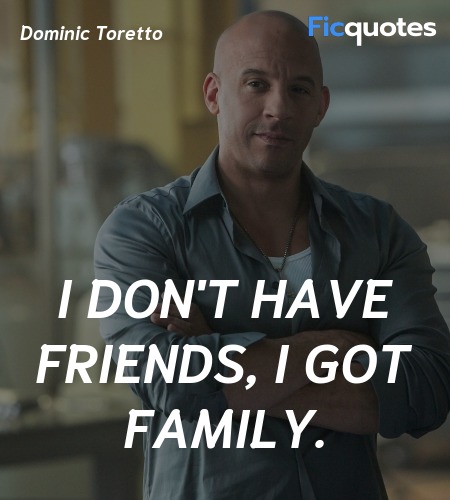 I don't have friends, I got family. 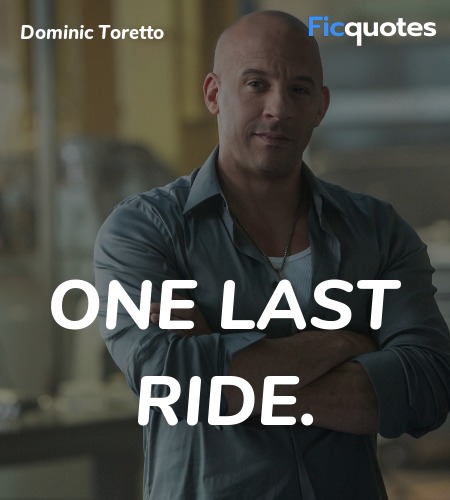 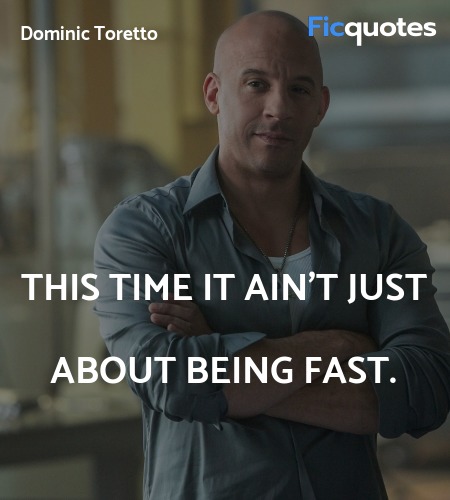 This time it ain't just about being fast.

You risk life and limb to save the free world, and what does it give you? Jell-o and a bad '70s TV show. 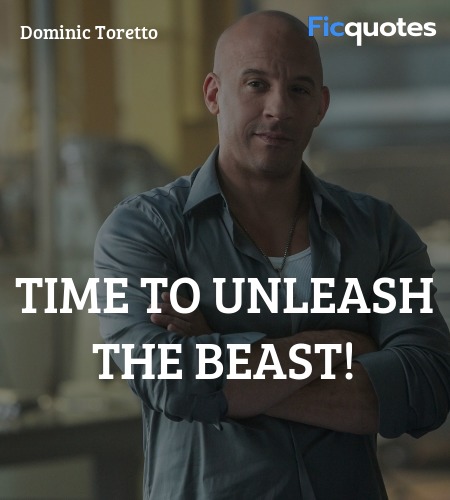 Time to unleash the beast!

They say if you want to glimpse the future, just look behind you. I used to think that was bollocks. Now I realize... you can't outrun the past. When we were kids, you'd start fights with the toughest bastards in the yard. But I was the one who had to step in and finish them. You'd steal from the corner shop, but it was me who'd brave the old man's belt. I'd hope you'd outgrown it, that playing the gangster made you harder, smarter, better. But deep down, I guess I always knew you'd end up like this, despite everything I did teach you. Still, you're my flesh and blood. So you remain my cross to bear. Rest now, little brother, while I settle you one last score.

Deckard Shaw : They say if you want to glimpse the future, just look behind you. I used to think that was bollocks. And now I realise you can't outrun the past. When we were kids, you started fights with the toughest bastards in the yard, and I was the one that to step in and finish them. Rest now, little brother, want to settle you one last score.
Deckard Shaw : Take care of my brother. Anything happens to him, I'll come back looking for you!

Hobbs : I do know you, Dom, which is why now I give you the brother to brother answer. You do whatever it is you gotta do. When you find that sumbitch, just do me one favor.
Dominic Toretto : What's that?
Hobbs : Don't miss.

Mia : Hey. You okay?
Brian O'Conner : Yeah. This guy's just, relentless.
Mia : That's why Dom needs you. You two need to find this guy and you need to stop him before he does any more damage to our family.
Brian O'Conner : I just... I've screwed up so many things. I couldn't live with myself if I screwed this up, too.
Mia : You won't. I believe in you. I believe in us. That's all that matters. I love you, Brian.
Brian O'Conner : Love you, baby.
Mia : Just promise me. After this, we're done. No more jobs, no more enemies. Come back to us.
Brian O'Conner : I won't let you down, Mia.
Mia : I know.

Mia : Brian, are you okay?
Brian O'Conner : Mia, listen to me. Something's about to go down. And if you don't hear from me in 24 hours, I need you to take Jack and move on. You understand? You understand what I'm saying?
Mia : Look, I can't do that Brian. I can't. We're going to have another baby. It's a little girl.
Mia : And she's going to need her father so you have to finish what you're doing and you have to come home to her. You have to come home to us. I'm sorry I didn't tell you before, I was scared you would be disappointed with domestic life.
Brian O'Conner : You know the best decision I ever made was stepping into the store and buying that first sandwich.
Mia : It was such a bad sandwich.

Letty : Would you believe I knocked him out with my charm?
Kara : You're not that charming, bitch.

Sean Boswell : If you get the guy who did this to Han, what are you going to do?
Dominic Toretto : Words ain't even been invented yet.

Deckard Shaw : You sure you brought enough backup?
Hobbs : They're not for me. They're protection for you from me killing your ass.
Deckard Shaw : You do know this won't hold me.
Hobbs : After you dig through 38 feet of concrete and steel, my fist and a body bag will be waiting for you on the other side. Until then, you better start digging.

Thought you could leave without saying goodbye?

They say to live in the hearts of those we leave behind is not to die, but he put you in this grave, so now I'll do the same to him.

The thing about street fights... the street always wins.


Hobbs : You sure as hell ain't the I.T. guy.
Deckard Shaw : One second...
Hobbs : You just earned yourself a dance with the devil, boy. You're under arrest.
Deckard Shaw : Like I said: I'm here for the team that crippled my brother.
Hobbs : There was no damn team. It was just one man... and he's standing right in front of you.
Deckard Shaw : The lady was right. You're a terrible liar.

Samantha Hobbs : Dominic Toretto, right? My dad said he kicked your ass once.
Hobbs : Young lady, watch your mouth.
Dominic Toretto : Your dad's on heavy pain meds. I can understand if his history is a little hazy.

A war is coming to us whether we like it or not. If a war is coming, we're gonna face it on the streets we know best.

We hope you enjoyed reading Furious 7 quotes. Browse other movie quotes on Ficquotes also. If you think we missed any quote from Furious 7, please send it to us so we can expand our collection of the best Furious 7 quotes.