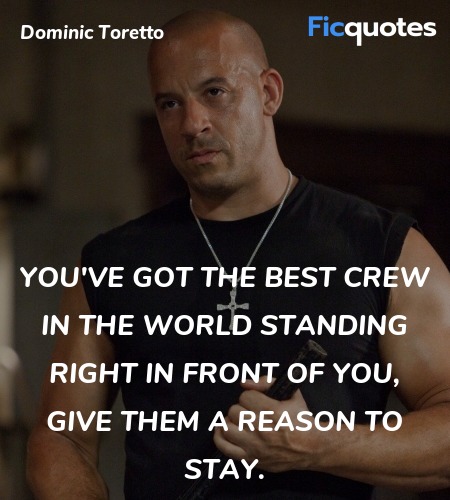 You've got the best crew in the world standing right in front of you, give them a reason to stay.

Roman : I thought that was our last job, Brian. So now we work for the Hulk? That's what we're doing? Why do I smell baby oil?
Hobbs : If you keep running your piehole, you're gonna smell an ass-kicking. 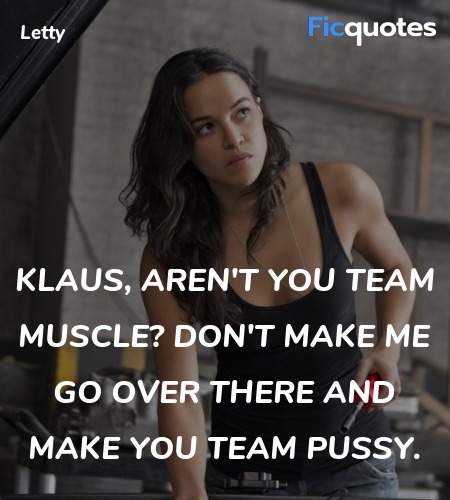 Klaus, aren't you team muscle? Don't make me go over there and make you team pussy.

You know what they say, Stasiak, if you want the career-changing big fish, you gotta be willing to put on the big boy panties and sail out to the deep water.

Tej Parker : It's all between you and the car you build it's a bond, it's a commitment.
Hobbs : Sounds like a marriage.
Tej Parker : Yeah, but with cars when you trade up they don't take half your shit.

Roman : Hey, uh, which one of these is like a dollar?
Hobbs : It's on the house.

The crew we're after, they hit like thunder and disappear like smoke. You go in alone, you won't ever touch them. I've been chasing these guys across four continents and twelve countries and believe me the last place I want to be is in front of your door step selling girl scout cookies. I need your help Dom. I need your team.

Tej Parker : It's all between you and the car. It's a bond. It's a commitment.
Hobbs : Sounds like a marriage to me.
Tej Parker : Yeah! But the car when you trade the car they don't take away half of your shit.

NATO Commander : We've got four teams on overwatch, sniper spotters in roosts north and south of the target.
Hobbs : Just keep all your man out of sight. When they drive that truck in here, I wanna come crashing down on them like the walls of Jericho!

I may not remember anything, but I know one thing about myself. Nobody makes me do anything I don't want to.

Racer : Listen up! Out here, we're used to getting what we want. This is London, baby! But remember... don't bite the bait. Are you ready?
Racer : Ready?
Letty Ortiz :Ready.
Racer :Steady?
Racer : Go!

Ian Shaw : If Ivory's dead, he made a mistake. If you make a mistake, you pay the price.
Letty Ortiz : That's a great eulogy, Shaw. You gonna give the same speech for the rest of us when we go out?