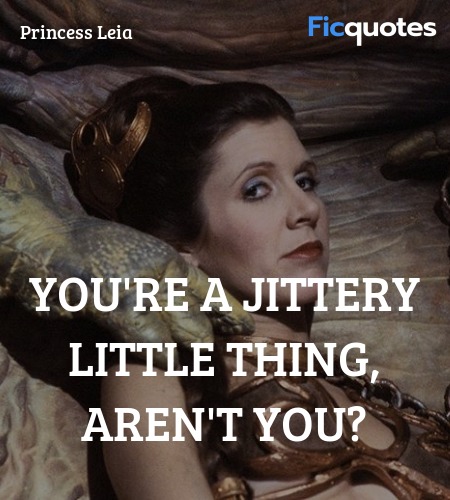 You're a jittery little thing, aren't you? 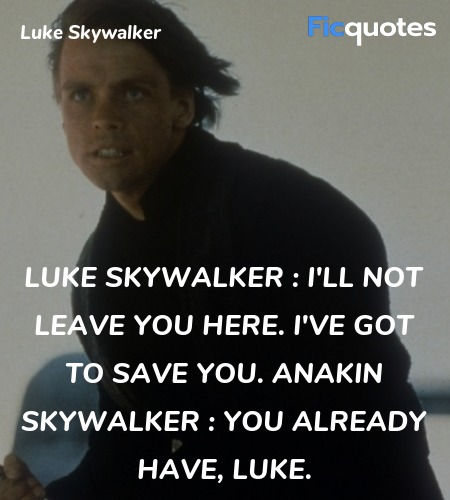 Luke Skywalker : I'll not leave you here. I've got to save you.
Anakin Skywalker : You already have, Luke. 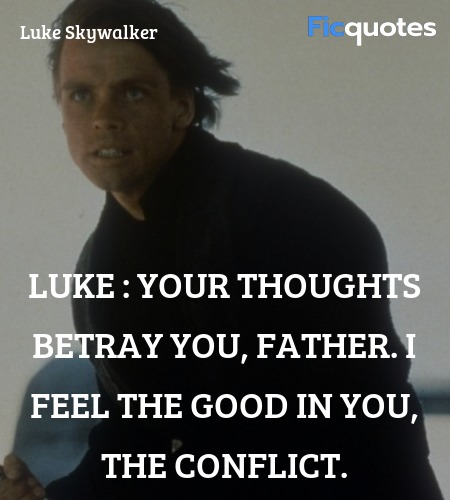 Luke : Your thoughts betray you, Father. I feel the good in you, the conflict.

Well, short help is better than no help at all.

General, count me in.

Darth Vader : There is no conflict.
Luke : You couldn't bring yourself to kill me before and I don't believe you'll destroy me now.
Darth Vader : You underestimate the power of the Dark Side. If you will not fight, then you will meet your destiny.

Luke : Master Yoda, you can't die.
Yoda : Strong am I with the Force, but not that strong.

Luke : I will not fight you, father.
Darth Vader : You are unwise to lower your defenses!

Han Solo : Chewie? Chewie, is that you?
Han Solo : Ch-Chewie! I can't see, pal. What's going on?
Han Solo : Luke? Luke's crazy! He can't even take care of himself, much less rescue anybody.
Han Solo : A Jedi Knight? Jeez, I'm out of it for a little while, everyone gets delusions of grandeur!


I have a really bad feeling about this.
Han Solo : 3PO. You tell that slimy piece of worm-ridden filth, he'll get no such pleasure from us.
Han Solo : Right?

C-3PO : He says the scouts are going to show us the quickest way to the shield generator.

Han Solo : Good. How far is it? Ask him.
Han Solo : We need some fresh supplies too.
Han Solo : Try and get our weapons back.
Han Solo : Hurry up, will ya? Haven't got all day!

It's over, Commander. The rebels have been routed and they're fleeing into the woods. We need reinforcements to continue the pursuit.