Best Pirates of the Caribbean: On Stranger Tides (2011) Movie Quotes

Pirates of the Caribbean: On Stranger Tides (2011) 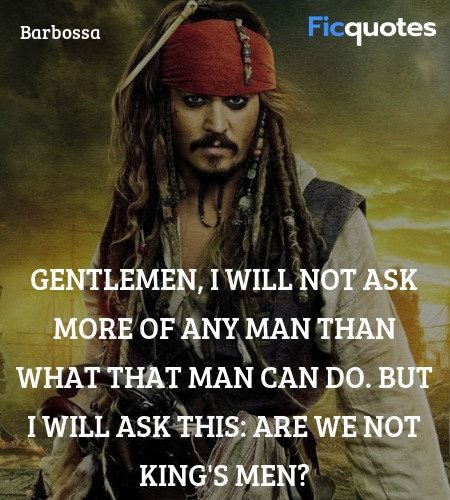 Gentlemen, I will not ask more of any man than what that man can do. But I will ask this: are we not king's men? 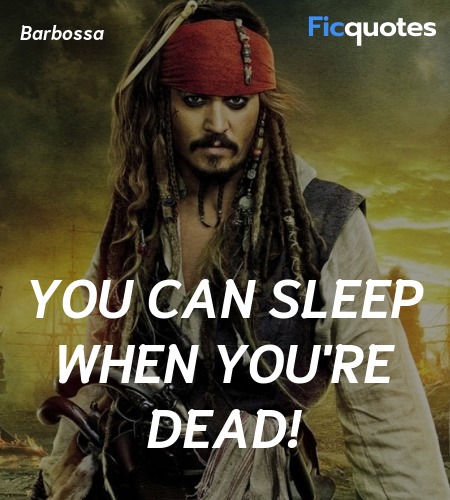 You can sleep when you're dead! 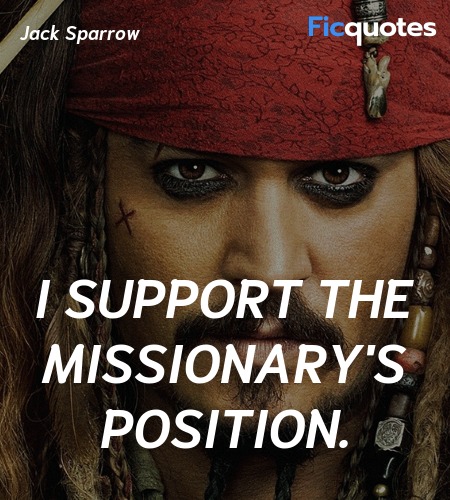 I support the missionary's position. 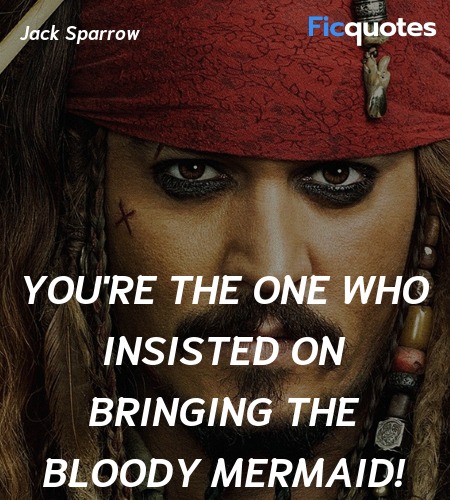 You're the one who insisted on bringing the bloody mermaid!

Did everyone see that? Because I will not be doing it again.

There's the Jack I know.

Hands aloft and bear away! Stable ahead to White Cap Bay!

He's even more annoying in miniature.

You've stolen me. And I'm here to take meself back.

I cannot save you both. One of you must sacrifice.

Why is the Black Pearl in the bottle?

Clergyman, on the off chance that this does not go well for me, I would like it noted here and now that I am fully prepared to believe in whatever I must, so that I may be welcomed into that place where all the "goody-goodies" get to go. Savvy?

There should be a "Captain" in there somewhere.

Blackbeard. Edward Teach. The pirate all pirates fear. Resurrector of the dead in his spare time.

Taken, not lost. We were off the coast of Hispanola when we came under attack. No provocation, nor warning or offer of parley. We were peppered with cannon fire. And then the sea beneath the Pearl began to roil. The Pearl was pitching and yawing so violently and every rail and spar all at once began to creak - the rigging had come to life! Our own ship turned against us. Tangling the crew, wrapping them like snakes... and wrapping around my leg! But my arms were free and my sword was still in my hand. I am the master of my ship, not Blackbeard. I am the master of my fate, not Blackbeard! So I did what needed done... I survived.

How is it we can never meet without you pointing something at me?

Barbossa : We travel by foot! Gibbs, I require a heading.
Groves : Sir. The men!
Barbossa : They be dead already.
Groves : They don't sound dead.
Barbossa : Oh, is that so? Well, I hear nothing but seagulls, nesting. What is it that you hear, Mr. Groves?
Groves : Seaguls... nesting. Nothing more.
Barbossa : Heading, Gibbs?

If forty pirates dreamt forty nights of treasure, it would not match the contents of this room

In faith, there is light enough to see, but darkness enough to blind.

If I don't kill a man every now and then, they forget who I am.

Philip : I was wrong. Not every soul can be saved.
Blackbeard : Behold, gentlemen! A man formerly of faith.

If I do not make it to the fountain in time, neither will you.

I hear a rumor... Jack Sparrow is in London, hellbent to find the Fountain of Youth.

Jack Sparrow : You know the feeling you get when standing in a high place, the sudden urge to jump...
Jack Sparrow : I don't have it.

I want a father, Jack. I haven't had one.

There'll be dangers along the way... firstly mermaids, zombies... Blackbeard.

The crime in which you have been found guilty of, is being innocent of being Jack Sparrow.

Gibbs, I was just on me way to break you out of jail. You stole my map.

Better to not know which moment may be your last. Every morsel of your entire being alive to the infinite mystery of it all.

Mutiny served me well. It gained me an audience with you.

Have I mentioned, sir, what a lovely daughter you have?

Seeing as how you're still alive, I say it's all been very successful thus far.

You demonstrated a lot of technique for someone I supposedly corrupted.

Captain, I wish to report a mutiny. I can name fingers and point names.

Death lies before us, as we sail to the Fountain of Youth.

I thought I should give you fair warning, we're taking the ship. Nothing personal.

Pirates of the Caribbean: On Stranger Tides (2011) Quotes Videos