Syndrome: Oh, no. Elastigirl? You married Elastigirl? Ho, ho, ho...
Syndrome: Oh - and got biz-zay! It's a whole family of supers! Looks like I hit the jackpot! Oh, this is just too good!

Helen: What on earth do you think the baby will be doing?
Edna: Well, I am sure I don't know, darling. Luck favors the prepared.

Snug, I'm calling in a solid you owe me.

Mirage: Oh... Hello! You must be Mrs. Incre...
Mr. Incredible: She was helping me to escape!
Elastigirl: No, that's what *i* was doing.

Lucius: Honey?
Honey: What?
Lucius: Where's my super suit?
Honey: What?
Lucius: WHERE - IS - MY - SUPER SUIT?
Honey: I, uh, put it away!
Lucius: Where?
Honey: Why do you need to know?
Lucius: I need it!
Honey: Uh-uh! Don't you think about running off doing no derring-do! We've been planning this dinner for two months!
Lucius: The public is in danger!
Honey: My evening's in danger!
Lucius: YOU TELL ME WHERE MY SUIT IS, WOMAN! We are talking about the greater good!
Honey: 'Greater good?' I am your wife! I'm the greatest *good* you are ever gonna get! 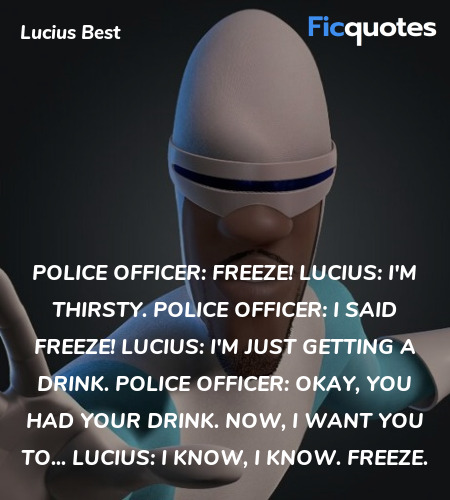 Superladies? They're always trying to tell you their secret identity... think it'll strengthen the relationship or something like that. I say, "Girl, I don't wanna know about your mild-mannered alter ego or anything like that. I mean, you tell me you're, uh... S-Super, Mega, Ultra Lightning Babe, that's alright with me. I'm good... I'm good. 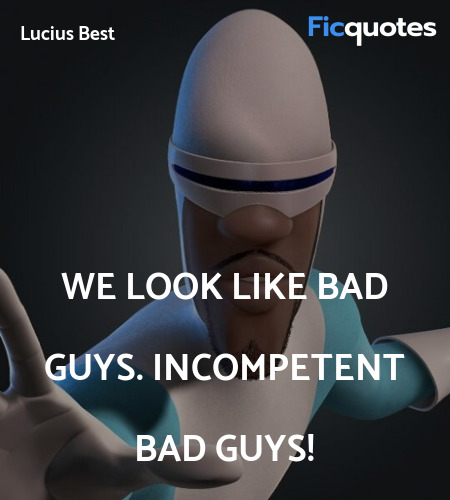 Helen: Dash... this is the third time this year you've been sent to the office. We need to find a better outlet. A more... constructive outlet.
Dash: Maybe I could, if you'd let me go out for sports.
Helen: Honey, you know why we can't do that.
Dash: But I promise I'll slow up. I'll only be the best by a tiny bit.
Helen: Dashiell Robert Parr, you are an incredibly competitive boy, and a bit of a show-off. The last thing you need is temptation.
Dash: You always say 'Do your best', but you don't really mean it. Why can't I do the best that I can do?
Helen: Right now, honey, the world just wants us to fit in, and to fit in, we gotta be like everyone else.
Dash: But Dad always said our powers were nothing to be ashamed of, our powers made us special.
Helen: Everyone's special, Dash.
Dash: Which is another way of saying no one is.

Syndrome: Huh? Huh? Oh, come on! You gotta admit, this is cool! Just like a movie: the robot will emerge dramatically, do some damage, throw some screaming people. And just when all hope is lost? Syndrome will save the day! I'll be a bigger hero than you ever were.
Mr. Incredible: You mean you killed off real heroes so that you could pretend to be one?
Syndrome: Oh, I'm real. Real enough to defeat *you*! And I did it without your precious gifts, your oh-so-special powers. I'll give them heroics. I'll give them the most spectacular heroics anyone's ever seen! And when I'm old and I've had my fun, I'll sell my inventions so that everyone can be superheroes. *Everyone* can be super! And when everyone's super...
Syndrome: ...no one will be.

Oh, come on! You gotta admit this is cool! Just like a movie! The robot will emerge dramatically, do some damage, throw some screaming people, and just when all hope is lost, *Syndrome* will save the day! I'll be a bigger hero than you ever were!

It's bigger. It's badder. Ladies and gentlemen, it's too much for Mr. Incredible!

Syndrome: Shhh. The baby's sleeping.
Syndrome: You took away my future. I'm simply returning the favor. Oh, don't worry. I'll be a good mentor: supportive, encouraging...
Syndrome: Everything you weren't. And in time, who knows? He might make a good sidekick.

Somebody needs to teach this hunk of metal... a few manners!

Syndrome: Whoa, whoa, whoa! Hey, time out! What have we here? Matching uniforms? Oh, no! Elastigirl?
Syndrome: You married Elastigirl? Whoa! And got busy! It's a whole family of supers! Looks like I've hit the jackpot! Oh, this is just too good!

Dash: Dad, that was so cool when you threw that car!
Mr. Incredible: Not as cool as you running on water!

Edna: It will be bold! Dramatic!
Bob: Yeah!
Edna: Heroic!
Bob: Yeah. Something classic, like, like Dynaguy. Oh, he had a great look! Oh, the cape and the boots...
Edna: No capes!
Bob: Isn't that my decision?
Edna: Do you remember Thunderhead? Tall, storm powers? Nice man, good with kids.
Bob: Listen, E...
Edna: November 15th of '58! All was well, another day saved, when... his cape snagged on a missile fin!
Bob: Thunderhead was not the brightest bulb...
Edna: Stratogale! April 23rd, '57! Cape caught in a jet turbine!
Bob: E, you can't generalize about these things...
Edna: Metaman, express elevator! Dynaguy, snagged on takeoff! Splashdown, sucked into a vortex!
Edna: No capes!

Bob: Weren't you in the news? Some show in, Prayge... Prague?
Edna: Milan, darling. Milan. Supermodels. Heh! Nothing super about them... spoiled, stupid little stick figures with poofy lips who think only about themselves. Feh! I used to design for gods!

No matter how many times you save the world, it always manages to get back in jeopardy again. Sometimes I just want it to stay saved! You know, for a little bit? I feel like the maid; I just cleaned up this mess! Can we keep it clean for... for ten minutes!

Dash: Are we there yet?
Mr. Incredible: We get there when we get there!

Mr. Incredible: I was wrong to treat you that way. I'm sorry...
Syndrome: See? Now you respect me, because I'm a threat. That's the way it works. Turns out there are lots of people, whole countries, that want respect, and will pay through the nose to get it. How do you think I got rich? I invented weapons, and now I have a weapon that only I can defeat, and when I unleash it...
Syndrome: Oh, ho ho! You sly dog! You got me monologuing! I can't believe it...

Edna: You need a new suit, that much is certain.
Bob: A new suit? Well, where the heck am I gonna get a new suit?
Edna: You can't! It's impossible! I'm far too busy, so ask me now before I can become sane.
Bob: Wait? You want to make me a suit?
Edna: You push too hard, darling! But I accept!

Syndrome: It's finally ready! You know, I went through quite a few supers to make it worthy to fight you, but man, it wasn't good enough! After you trashed the last one, I had to make some major modifications. Sure, it was difficult, but you are worth it. I mean, after all... I am your biggest fan.
Mr. Incredible: Buddy?
Syndrome: My name is not Buddy! And it's not Incrediboy, either. That ship has sailed. All I wanted was to help you. I only wanted to help, and what do you say to me?
Mr. Incredible: Fly home, Buddy. I work alone.
Syndrome: It tore me apart. But I learned an important lesson. You can't count on anyone, especially your heroes.

Bob: Listen closely. I'd like to help you but I can't. I'd like to tell you to take a copy of your policy to Norma Wilcox on... Norma Wilcox, W-I-L-C-O-X... on the third floor, but I can't.
Bob: I also do not advise you to fill out and file a WS2475 form with our legal department on the second floor. I would not expect someone to get back to you quickly to resolve the matter. I'd like to help, but there's nothing I can do.

Edna: This is a horrible suit, darling. You can't be seen in this. I won't allow it. Fifteen years ago, maybe, but now? Feh!
Bob: Wait, what do you mean? You designed it.
Edna: I never look back, darling! It distracts from the now.

Elastigirl: Let go of me! Let go, you lousy, lying, unfaithful creep...
Mr. Incredible: How could I betray the perfect woman?
Elastigirl: Oh, you're referring to me now?

Bob: I'm sorry ma'am, I know you're upset.
Bob: Pretend to be upset.

You're not affiliated with me!

Of course I have a secret identity. I don't know a single superhero who doesn't. Who wants the pressure of being super all the time?

Edna: I didn't know the baby's powers so I covered the basics.
Helen: Jack-Jack doesn't have any powers.
Edna: No? Well, he'll look fabulous anyway.

Helen: Huh?
Edna: You are Elastigirl! My God...
Edna: Pull-yourself-together! "What will you do?" Is this a question? You will show him you remember that he is Mr. Incredible, and you will remind him who *you* are. Well, you know where he is. Go, confront the problem. Fight! Win!
Edna: And call me when you get back, darling. I enjoy our visits.