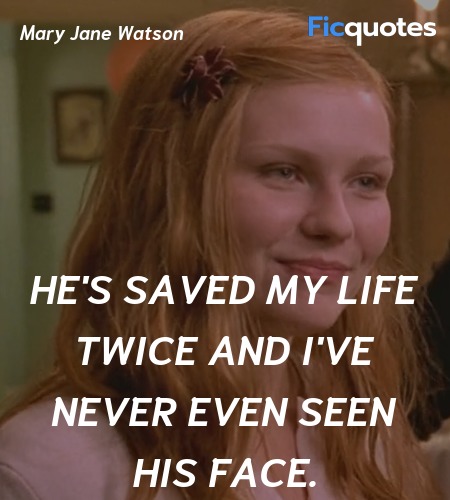 He's saved my life twice and I've never even seen his face. 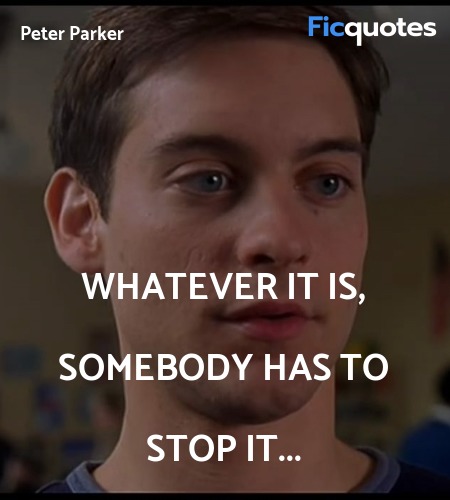 Whatever it is, somebody has to stop it...

Who am I? You sure you wanna know? The story of my life is not for the faint of heart. If somebody told you I was just your average, ordinary guy, not a care in the world, then somebody lied. 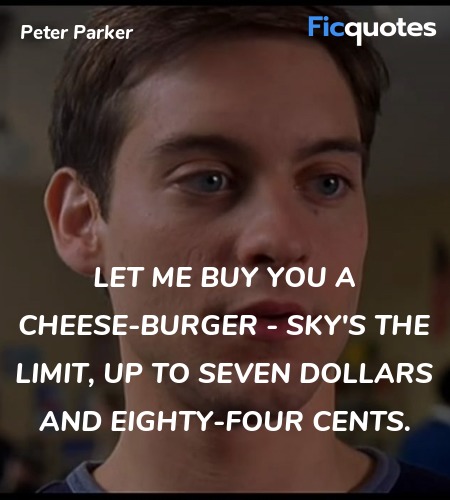 Let me buy you a cheese-burger - sky's the limit, up to seven dollars and eighty-four cents. 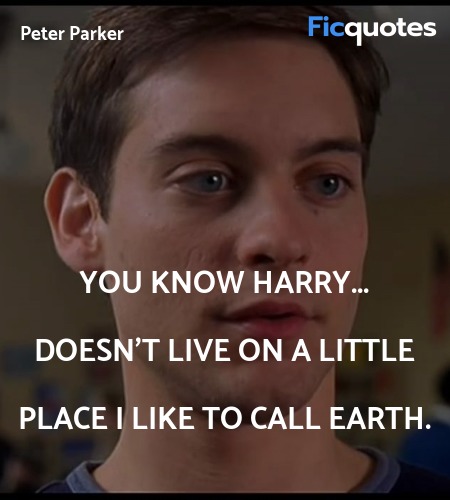 You know Harry... doesn't live on a little place I like to call Earth.

Norman Osborn : A bit of a slob, isn't he?
Aunt May : All brilliant men are.

Do I get to say thank you this time?

What the hell was that?

Whatever life holds in store for me, I will never forget these words: "With great power comes great responsibility." This is my gift, my curse. Who am I? I'm Spider-man.

Had you not been so selfish, your little girlfriend's death would have been quick and painless, but now that you've really pissed me off, I'm gonna finish her nice and slow.

Can Spider-Man come out to play?

Forty thousand years of evolution and we've barely even tapped the vastness of human potential.

This guy, Flash Thompson, he probably deserved what happened. But just because you can beat him up doesn't give you the right to. Remember, with great power comes great responsibility.

They're all beautiful, until they're snarling after your trust fund like a pack of ravening wolves.

A word to the "not-so-wise" about your little girlfriend. Do what you need to with her, then broom her fast.

I am going to rectify certain inequities.

I offered you friendship, and you spat in my face.

Harry tells me you're quite the science whiz. You know, I'm something of a scientist myself.

What have you done? WHAT HAVE YOU DONE?

Uncle Ben : And the Lord said, "Let there be light." And voilà! There is light. Forty soft, glowing watts of it.
Aunt May : Good boy. God will be thrilled, just don't fall on your ass.

Uncle Ben : Peter, look. You're changing. I know. I went through exactly the same thing at your age.
Peter Parker : No. Not exactly.

Peter Parker : You don't trust anyone, that's your problem.
J. Jonah Jameson : I trust my barber.

Wrestling Promoter : You coulda taken that guy apart! Now he's gonna get away with my money!
Peter Parker : I missed the part where that's my problem.

Peter Parker : Who am I? You sure you want to know? The story of my life is not for the faint of heart. If somebody said it was a happy little tale... if somebody told you I was just your average ordinary guy, not a care in the world... somebody lied. But let me assure you: This, like any story worth telling, is all about a girl. That girl. The girl next door. Mary Jane Watson. The woman I've loved since before I even liked girls.
Peter Parker : I'd like to say that's me sitting next to her.
Peter Parker : Aw, heck, I'd even take him.
Peter Parker : That's me.

Not everyone is meant to make a difference. But for me, the choice to lead an ordinary life is no longer an option.

Peter Parker : I can't help thinking about... the last thing I said to him. He tried to tell me something important, and I threw it in his face.
Aunt May : You loved him. And he loved you. He never doubted the man you'd grow into; how you were meant for great things. You won't disappoint him.

Peter Parker : Can I do anything for you?
Aunt May : You do too much - college, a job, all this time with me... You're not Superman, you know.

Peter Parker : Spider-Man wasn't trying to attack the city, he was trying to save it. That's slander.
J. Jonah Jameson : It is not. I resent that. Slander is spoken. In print, it's libel.

Hey, kiddo. Let Mom and Dad talk for a minute, will ya?

Who am I? Are you sure you want to know? If someone told you I was just your average ordinary guy without a care in the world, somebody lied. Truth is it wasn't always like this. There was a time when life was a lot less complicated.

No matter what I do, no matter how hard I try, the ones I love will always be the ones who pay.

Aunt May : You know, you were about six years old when Mary Jane's family moved in next door. And when she got out of the car, and you saw her for the first time, you grabbed me and you said, "Aunt May, Aunt May, is that an angel?"
Peter Parker : Gee, did I really say that?

Aunt May : Peter, are you alright?
Peter Parker : I'm fine.

Sorry I'm late, it's a jungle out there; I had to beat an old lady with a stick to get these cranberries.

The itsy bitsy spider climbed up the water spout. Down came the Goblin and took the spider out.

Aunt May : Lead us not into temptation, but deliver us...
Aunt May : DELIVER US!
Green Goblin : Finish it. FINISH IT!
Aunt May : FROM EVIL!

The one thing they love more than a hero is to see a hero fail.

I know this has been a difficult time for you, but I want you to try to enjoy this day. Commencement: the end of one thing, the start of something new.