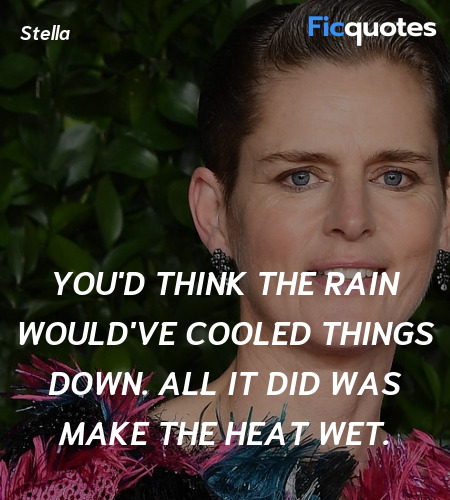 You'd think the rain would've cooled things down. All it did was make the heat wet. 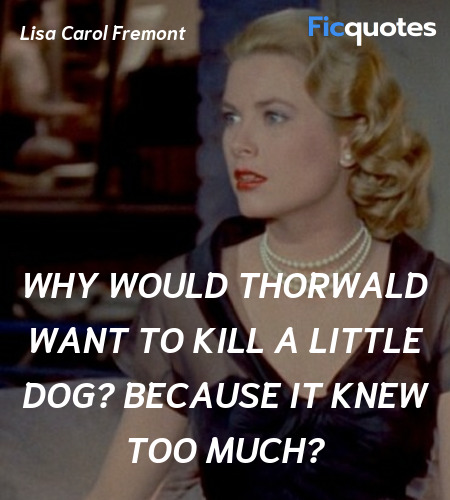 Why would Thorwald want to kill a little dog? Because it knew too much?

According to you, people should be born, live, and die in the same place. 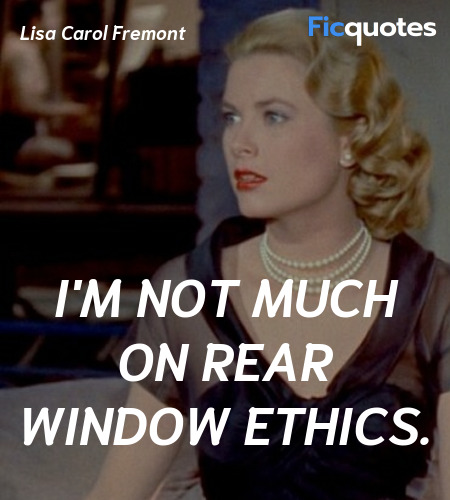 I'm not much on rear window ethics.

Mind if I use that portable keyhole?

Stella: He's gonna run out on her, the coward.
Jeff: Sometimes it's worse to stay than it is to run.

Intelligence. Nothing has caused the human race so much trouble as intelligence.

A woman never goes anywhere but the hospital without packing makeup, clothes, and jewelry.

A murderer would never parade his crime in front of an open window.

Tell me exactly what you saw and what you think it means.

I can hear you now: "Get out of my life, you wonderful woman. You're too good for me."

When two people love each other, they come together - WHAM - like two taxis on Broadway.

Every man's ready to get married when the right girl comes along.

You haven't spent much time around cemeteries, have you?

Well, if there's one thing I know, it's how to wear the proper clothes.

Stella: How much do we need to bail Lisa from jail?

Jeff, you know if someone came in here, they wouldn't believe what they'd see. You and me with long faces plunged into despair because we find out a man didn't kill his wife. We're two of the most frightening ghouls I've ever known.

Stella: You heard of that market crash in '29? I predicted that.
Jeff: Oh, just how did you do that, Stella?
Stella: Oh, simple. I was nursing a director of General Motors. Kidney ailment, they said. Nerves, I said. And I asked myself, "What's General Motors got to be nervous about?" Overproduction, I says; collapse. When General Motors has to go to the bathroom ten times a day, the whole country's ready to let go.

Jeff: When am I going to see you again?
Lisa: Not for a long time...
Lisa: at least not until tomorrow night.

Jeff: He killed a dog last night because the dog was scratching around in the garden. You know why? Because he had something buried in that garden that the dog scented.
Lt. Doyle: Like an old hambone?
Jeff: I don't know what pet names Thorwald had for his wife.

Lisa: What's he doing? Cleaning house?
Jeff: He's washing and scrubbing down the bathroom walls.
Stella: Must've splattered a lot.
Stella: Come on, that's what were all thinkin'. He killed her in there, now he has to clean up those stains before he leaves.
Lisa: Stella... your choice of words!
Stella: Nobody ever invented a polite word for a killin' yet.

Jeff: Why would a man leave his apartment three times on a rainy night with a suitcase and come back three times?
Lisa: He likes the way his wife welcomes him home.

Lisa: I wish I were creative.
Jeff: You are. You're great at creating difficult situations.