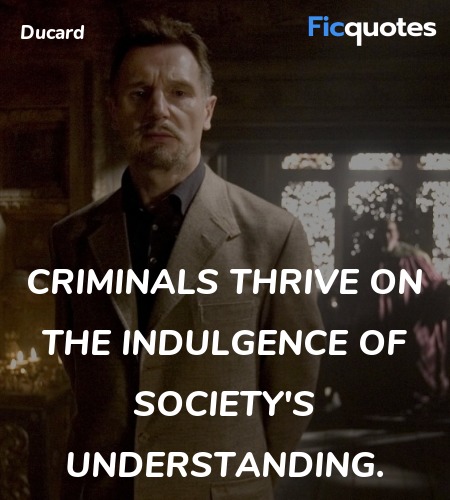 Criminals thrive on the indulgence of society's understanding. 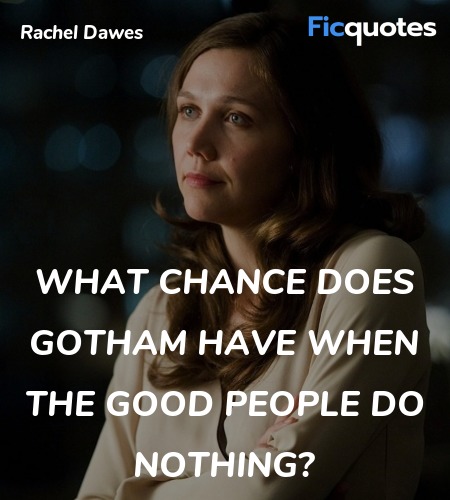 What chance does Gotham have when the good people do nothing? 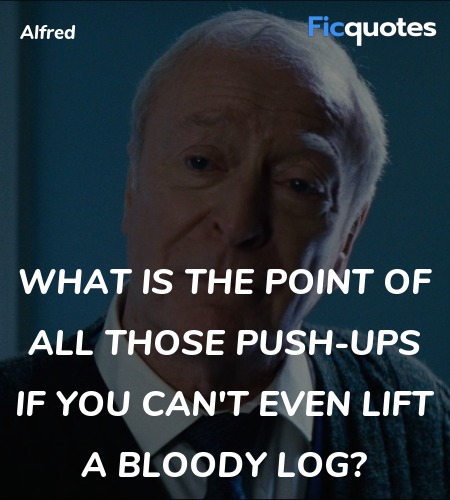 What is the point of all those push-ups if you can't even lift a bloody log? 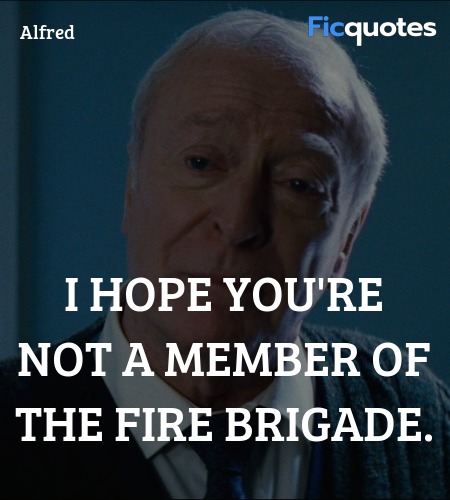 I hope you're not a member of the fire brigade.

Father would be very proud of you, just like me.

Things are worse than ever down here.

You must become more than just a man in the mind of your opponent.

You look very fashionable. Apart from the mud.

But a criminal is not complicated. What you really fear is inside yourself. You fear your own power. You fear your anger, the drive to do great or terrible things.

Rachel Dawes : Hey, what the hell are you doing?
Ra's al Ghul : Gentlemen, time to spread the word. And the word is panic.

My boss has been missing for two days. Which, in this town, means that I should probably start by looking at the bottom of the river.

Deep down you may still be that same great kid you used to be. But it's not who you are underneath, it's what you do that defines you.

You traveled the world... Now you must journey inwards... to what you really fear... it's inside you... there is no turning back. Your parents' death was not your fault. Your training is nothing. The will is everything. If you make yourself more than just a man, if you devote yourself to an ideal, you become something else entirely. Are you ready to begin?

Ra's al Ghul : Tomorrow the world will watch in horror as its greatest city destroys itself. The movement back to harmony will be unstoppable this time.
Bruce Wayne : You attacked Gotham before?
Ra's al Ghul : Of course. Over the ages, our weapons have grown more sophisticated. With Gotham, we tried a new one: Economics. But we underestimated certain of Gotham's citizens... such as your parents. Gunned down by one of the very people they were trying to help. Create enough hunger and everyone becomes a criminal. Their deaths galvanized the city into saving itself... and Gotham has limped on ever since. We are back to finish the job. And this time no misguided idealists will get in the way. Like your father, you lack the courage to do all that is necessary. If someone stands in the way of true justice... you simply walk up behind them and stab them in the heart.

But I know the rage that drives you. That impossible anger strangling the grief, until the memory of your loved one is just... poison in your veins. And one day, you catch yourself wishing the person you loved had never existed, so you would be spared your pain.

In the Civil War, your great-great grandfather was involved in the underground railroad, secretly transporting free slaves to the North. And I suspect these caverns came in handy.

Batman may have made the front page, but Bruce Wayne got pushed to page eight.

In the Civil War, your great-great grandfather was involved in the Underground Railroad, secretly transporting freed slaves to the North. And I suspect these caverns came in handy.

Alfred Pennyworth : Took quite a fall, didn't we, Master Bruce?
Thomas Wayne : And why do we fall, Bruce? So we can learn to pick ourselves up.